Interview: The impact of The Welsh Immunisation System in the mass COVID-19 vaccination rollout 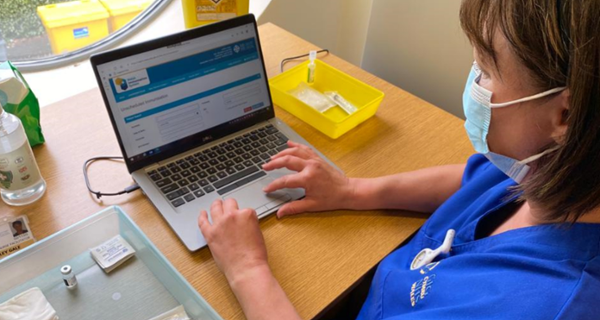 Interview with Hayley Gale, Immunisation Nurse Facilitator, on the impact of The Welsh Immunisation System in the mass COVID-19 vaccination rollout.

The Welsh Immunisation System (WIS) has won awards and praise worldwide from digital leaders, vaccination managers and system-users. It is used to schedule and record vaccinations and was built in just sixteen weeks - by a team in Digital Health and Care Wales – ready for delivering the first COVID-19 vaccinations in December 2020.

We spoke with one of the first nurses to use the system - Immunisation Nurse Facilitator Hayley Gale - about the emotionally charged first weeks of the vaccination programme, and how WIS was fundamental in allowing her and her colleagues to vaccinate over 1000 people a day, at a mass vaccination centre in Bridgend.

Prior to the creation of WIS, what key concerns did you have surrounding the mass vaccination rollout?

“Initially there was just an awareness of the sheer volume of numbers we would have to get through. It only dawned on us later that we needed to keep a record of the vaccinations and consider how we would do that. I already knew we didn’t have a suitable computer system to do this because we have used paper filing systems for our children’s immunisations. We were already encountering problems with our current immunisations programmes and so doing this with Covid on a scale of millions would have been impossible.

When we started on the first day, we had WIS but we were still using the paper consent forms. We did this because it was thought that they would be quicker to use as we were already familiar with them. However, it quickly transpired that this was not quicker. Nurses became increasingly keen to get trained on WIS in order to manage the workload.”

Looking back on the pandemic, how did WIS support the rollout of the mass vaccination programme?

“At the time of the mass vaccination rollout, our team was instructed to set up and manage some vaccination centres for 3 months. This was quite alarming as there was a lot to adapt to in a short period of time and maintaining order over the filing of thousands of paper forms would have been a huge added responsibility. However, to have WIS and a computer system which took away paper filing and recorded information immediately, took away a huge workload from us which otherwise would have been immense.

Furthermore, when we were using the paper consent forms, it was incredibly time consuming. It transpired that it took around triple the time of using the Welsh Immunisation System and on a mass scale this made all the difference. On the first days of my training, I didn’t realise how simple WIS would be and I assumed it would be complex. However, it isn’t complex at all and going back into the system to make changes on patient records has been incredibly helpful.

WIS was and continues to be a dynamic system, which is able to adapt to the needs on the floor. There have been occasions where we have discussed certain elements of the system that doesn’t work or isn’t helpful and the WIS team are able to change it. This means the system is constantly evolving to suit our needs.”

In the busiest period of the vaccination roll out, what was the atmosphere like for your team and the nurses?

“In the busiest period we were vaccinating over 1000 people a day and in the early stages of the vaccinations, the majority of these people were elderly. It was highly emotional encountering people on a daily basis who hadn’t been out of their house or spoken to anyone for months. There were people who had lost family members and their support networks and a lot of them just wanted to talk. This was particularly difficult because we had a time schedule and a quota of people we needed to get through. We wanted to engage with each person however we were always up against the clock. This pressure felt particularly difficult.

Then there was also the overwhelming feeling of relief. In the early days of the vaccinations, there were many people, nurses included, who just cried out of sheer relief that they had been vaccinated. I personally knew many staff members who had lost their lives shortly before the vaccination rollout and had visited many of their memorials. To know that they had just missed the vaccine was tragic, however, to feel the relief of knowing that myself and my family were receiving it was huge. For those who were classed as vulnerable, receiving the vaccine allowed them to breathe again. They had the hope of a future in which they could go outside and socialise with their loved ones without the threat of Covid. People forget how personal and close it was to home in the early days. The vaccinations are less emotional now because people are more concerned about whether they can go on holiday. However, in the beginning it was incredibly emotionally charged.”

Wales was considered to be ‘world-leading’ in its vaccination uptake. From your perspective, could you tell us why?